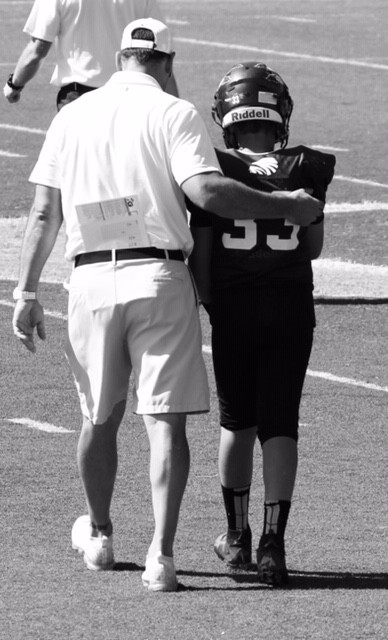 At the Guilford Youth Football and Cheerleading (GYF&C) board meeting on Monday, December 9th, the league said farewell to two long-time board members. Rance Hillier completed his fourth term as president of GYF&C and will hand the reins over to new leadership. During Hillier’s tenure he presided over the league’s continued growth and success on and off the field. The youth football program has experienced growth in participation while strengthening the organization’s financial sustainability along with numerous enhancements to equipment, player safety protocols and elevation of the Guilford Youth Football and Cheerleading program in the community. Hillier will continue to serve as head coach for one final season in 2020 as he plans to lead the incoming 8th grade team for their sixth and final season of youth football.

Kevin Smith completed his third term as treasurer of the league and has begun the process of transitioning his responsibilities. In addition to his board duties, Smith has served as an assistant coach for two different youth teams and will continue in that role for the 2020 season with the incoming 8th grade team and the modified flag football team.

“It has been a pleasure serving alongside Rance and Kevin”, said newly elected president, Ken Alberti. “Guilford Youth Football and Cheerleading has continued on a positive path due to the leadership, dedication and commitment of these gentlemen. I look forward to carrying on Rance’s good work as president in the coming year and know we will see both men on the sideline leading their players in action during the 2020 season. The entire league sends its sincere and heartfelt thank you to Rance and Kevin for their tireless energy on behalf of every youth football player in Guilford.”

Several current board members transitioned to new roles while two new members joined the ranks. After several years serving as Vice President, Ken Alberti moves into the role of President. Two board members, Nick Paradise and Dan Tafro, move into officer roles and will serve as Vice President and Treasurer, respectively. All three men have served as head coaches within the league and will continue guiding youth players with various coaching responsibilities in 2020.

Rounding out the board positions are new members Jeff Manfredonia and Alisha Rayner Romano. Manfredonia will serve as secretary and Romano will be the cheer coordinator. Manfredonia most recently served as head coach of the kindergarten/first grade flag team while Romano helped lead the growing cheerleading team serving as co-head coach. In addition to their new board roles, both will continue to coach the flag and cheer teams in 2020.

All GYF&C members are welcome to attend monthly board meetings to learn more about league activities and initiatives. The board generally meets on the second Monday of each month. See the league website for specific dates, times and locations.